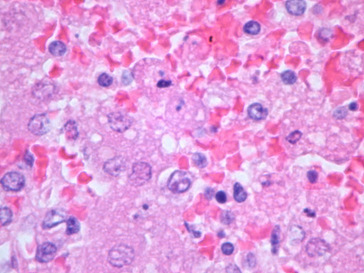 Canine Herpes Virus is widespread in the dog population and your dog may pick up the infection from many different sources but not show any symptoms at all. In adult dogs it is a mild disease and you only need to worry about it if you intend to breed from your bitch or allow your dog to be used at stud. In these circumstances the virus can be devastating to the pregnant bitch causing abortion, resorption of the unborn puppies and even the death of the whole litter in the first couple of weeks after birth.

Canine Herpes Virus (CHV-1) lives in the reproductive and respiratory tracts of both male and female dogs. There is no cure for an infected animal as once the initial infection has passed, the virus hides in the nervous system or ganglia and lies dormant until periods of stress cause the infection to flare up again.

The virus is transmitted by both sexual contact and as airborne particles, so dogs can become infected during mating but the virus is much more likely to be contracted through exposure to the respiratory aerosols of other dogs, i.e. by sniffing, licking and close contact. A recent study found that up to 80% of dogs in England have been exposed to the virus and a dog which is regularly shown or has been used in a mating programme will almost certainly fall in this category. The age at which a dog comes into contact with CHV has a huge impact on the severity of the symptoms. In puppies, their age and the stage of growth when infected, determine the effect and outcome of CHV. Whenever it occurs, the damage to puppies begins within 3 – 7 days after infection.

ADULT DOGS - Infected dogs may not show any symptoms, CHV in adult dogs is a mild disease which may just result in coughing or sneezing, the virus being one of the many causes of Kennel Cough. Male dogs may develop painful lesions on their genitals but in the female there could be no outward signs apart from missed mating or a lost litter, leading you to conclude that she is infertile. The normal body temperature of an adult dog is 101 - 102°F. When infected dogs run a fever, the virus is destroyed by body temperatures over 104°F. So, while it does not cause any significant problems in most adult dogs, if contracted by a pregnant female, it can result in abortion, re-absorption of litters, stillbirth and fading puppy syndrome.

THE UNBORN PUPPY - The virus attacks the placenta, starving the pups of nutrients, causing re-absorption, abortion and stillbirth. Because the bitch shows few or no symptoms, you may conclude that she is infertile or it was a missed mating. Any puppies which survive to be born are usually severely damaged.

NEWBORN PUPPIES – Puppies can be infected in utero or from vaginal secretions during the birth process. They can also be infected after birth from the mother’s saliva or nasal secretions. Puppies infected in utero are often born underweight and weak with damaged organs and immune systems, leaving them vulnerable to infection. Puppies infected in the first three weeks of life suffer from fading puppy syndrome where puppies fail to suckle and thrive, fading away within a few days. Affected puppies show significant signs of CHV infection. They will show lack of interest in nursing and may cry or whine continuously because they are uncomfortable or in pain. There is often a discharge from eyes and nose and they could pass soft, greenish yellow faeces. A rash on the belly can appear, due to bleeding under the skin. CHV multiplies rapidly when body temperature falls below 98.6°F; newborn pups have a lower body temperature than adults. This explains why they are so badly affected, unlike adults dogs, they cannot raise their body temperature in response to infection. Once a puppy reaches 3 – 4 weeks of age, the risk of death decreases because their body temperature control has matured sufficiently to mount a fever.

If you show your dogs and have a pregnant bitch at home, to minimise the chances of infection you should wash hands thoroughly and change clothes and shoes before going in to her. She should also be isolated from dogs returning from the show or similar event. The virus is not able to survive for long in the environment, disinfectant, mild bleach solutions and bright sunlight will all kill it. However, a dog incubating the virus will be able to infect your bitch if she has not already contracted CHV before her pregnancy.

There is a vaccine available to prevent these problems. Eurican Herpes 205 is a subcutaneous injection given in two doses. The first one at 7 – 10 days after mating and the second 1 – 2 weeks before the expected date of whelping. Because the virus lies dormant in a previously infected bitch and can flare up at times of stress such as mating and pregnancy, vaccination would need to be repeated during each subsequent pregnancy. The vaccine causes the bitch’s immune system to produce antibodies which are subsequently passed on to her puppies.