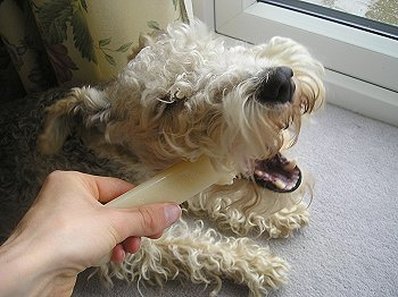 We are all familiar with the cartoon image of an owner throwing a stick for his dog to retrieve. BUT have you ever stopped to think of the possible consequences. I hadn't - until at dog training class one evening, I heard this dreadful tale.

Our trainer is an ex-police dog handler with thirty years experience. He told us how, after a training session, he had always thrown a stick into the lake for his dog to swim out to retrieve. One fateful evening, he threw the stick for his dog but it did not reach the water, it landed upright in the soft mud at the edge of the lake. His dog raced after it, pounced on the stick which went straight through the back of the dog's mouth, killing it almost instantly. A truly dreadful story, which I hope you will pass on, so that no other dog suffers the same fate.

Even toys sold in pet shops, specifically for dogs, can be dangerous. Terriers in particular, have a very strong bite and will destroy even those toys advertised as 'indestructible'.

Always keep an eye on your dog when he is playing, small, bitten-off pieces of toy can be a choking hazard or if the dog swallows enough of them, can block the intestines.

If you use a ball when playing with your dog, always use one which is larger than your dog's throat. A small ball can be dangerous if the dog is on the move when he catches it. At speed the ball can become lodged in the back of the mouth, blocking the airway. Balls with a rope attached give you something to pull on if they do get stuck in the dog's mouth or throat.

Rawhide dog chews are another danger; when the dog has chewed them for long enough, they become sticky and pliable and could get stuck in his throat if he tries to swallow it. Dogs love them but keep an eye on the chew and when it becomes soggy, take it away.

If you have to leave your dog for any length of time or when you go to bed at night, you should put away any toys which may be hazardous. Also, unless you crate your dog, it's a good idea to put mobile phones, TV remotes, shoes etc. out of reach. If you're going out for several hours and want to leave something to keep him occupied, a Kong stuffed with tasty nibbles usually keeps a dog quiet for a good while. My dogs eventually manage to rip their Kong into small pieces but it does take several hours of determined chewing!!

Soft toys are usually a no-go area for terriers although I do know some who will just play with it 'nicely'. Again, keep a check on the toy and remove it once the dog has bitten any holes where the stuffing can be pulled through and eaten.


Squeaky toys – the most annoying of the lot, particularly as most terriers have the instinct to bite until it stops squeaking. They are dangerous if the dog bites through to the squeaker and manages to swallow it.

Always check the label on the toy, if there is one. Many cheap toys manufactured in countries like China and Taiwan, are made from dubious materials and could be dangerous if your pet eats or sucks part of them. Dangerously high levels of lead have been found in the paint used and there have been reports on the internet about dog chews, manufactured in Asia, which contained poisonous ingredients, causing kidney damage!!