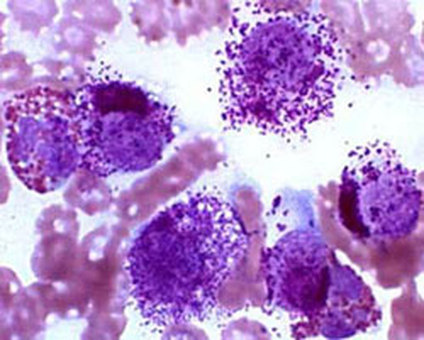 Body cells are the basic building blocks of life. In complex body forms such as humans and dogs, each cell in the body is programmed to grow, divide and die in an orderly way. Cell division is responsible for the growth of our bodies and how old or damaged cells are replaced. The genetic material (DNA) in each cell, controls this process.

However, DNA can be damaged or altered in a number of different ways ranging from radiation or chemical damage to natural mutation. When this occurs, normal cell growth and division is affected, cells do not die when they should and new cells are formed when the body does not need them. This uncontrolled growth of cells forms a cancer or tumour in the affected part of the body. Some cancers do not form tumours, for example, leukaemia is a cancer of the bone marrow and blood.

A tumour is an overgrowth of cells and the word tumour is often used as a common term for cancer. However, not all tumours are cancerous. If your dog develops a tumour, it will be described as benign or malignant. Benign tumours are not usually life threatening although this does not mean that they are entirely harmless. They can have a profound effect on the health of the dog when sited in an area where their growth causes space occupying problems. For example, a tumour within the confines of the skull may cause considerable problems with brain function if the tumour compresses the surrounding brain tissue, whereas a lipoma, a fatty mass common in dogs, and seen mainly within the fat underlying the skin, may be unsightly but rarely causes ill health. Cells in benign tumours do not spread to other areas of the body.

There are more than 100 different types of cancers, all sharing basic similarities. The definition of a cancer cell is; first, the genetic mutation which results in abnormal cell behaviour and second, the capacity for uncontrolled growth and spread into other areas of the body.

The opportunity for cells to mutate is much more likely where there is a rapid turnover of cells. Some of the most serious forms of cancer occur where cells divide frequently. White blood cells, skin, bone, lining of the bowel and airways are all examples of tissue where cell division is frequent and cancers affecting these areas of the body such as melanoma, carcinomas and mast cell tumours are all high on the list of cancers found in dogs.

Cancers are usually named for the cell or organ in which they originate and can be grouped into broad categories, the main ones being:

Some cancers are sex linked, mammary tumours being found in bitches and testicular tumours in dogs. Some are breed related and the oesteosarcoma (a bone cancer) is found in several large breeds and is probably related to the rapid growth of bone in these large dogs.

Often the life threatening effect of a cancer is not from the original site of the mutated cell but rather from the site of the secondary tumours. Mutated cells breaking away from the original site and migrating to other parts of the body is called metastatic spread and the resulting metastases form numerous new centres of tumour growth. The seriousness of these secondary tumours depends upon the part of the body in which they form. If tumours grow in the liver or lung, they can replace normal tissue to such an extent that the function of the organ and its ability to support life, is significantly affected, causing the death of the animal.

So we know that cancers share basic similarities but they can also show a wide variety of symptoms and illnesses depending on the type of cell involved.

A feature of osteosarcoma or cancer of the bone, is the way in which the abnormal cancer cells rapidly migrate away from the original site. Metastatic spread is likely to have caused secondary tumours in other areas of the body by the time a swelling on the bone is noticed or detected by x-rays. This makes it a challenging cancer to treat as amputation of the affected part is only of short term benefit if the resulting metastases form in any of the vital organs of the dog's body.

Skin cell cancers such as mast cell tumours and fibrosarcoma pose a different set of problems. Mast cell tumours are one of the most common cancers in dogs and surgery is often used as a first option in treatment. However, surgery often creates its own problems, it is often difficult to remove all of the malignant cells because they tend to extend well into the area which looks visually normal. The amount of tissue which needs to be removed to prevent the return of the tumour, often leaves a large wound which is very difficult to repair and may cause the dog major difficulties.

When a dog is diagnosed with cancer, the treatment options are the same as for humans; surgery, chemotherapy and radiotherapy. Most veterinary practices will not have the sophisticated equipment required to deliver these treatments and your dog will probably be referred to a specialist centre such as the Animal Health Trust in Suffolk w here they can benefit from advanced surgical techniques and treatments.

Many of the agents which cause genetic damage or mutation in cells are already well documented in human cancer research. The effects of tobacco smoke, certain chemicals, exposure to radiation and infection by viruses are all proven causes of cancer.

Continuing research into cancers and their causes, which affect our dogs, is being undertaken by scientists, geneticists and researchers at the Animal Health Trust. This research will be helped enormously when H.R.H. The Princess Royal opens the Trust's new Cancer Centre in November this year. The new facility will be called The Kennel Club Cancer Centre after Members of the Kennel Club gave a £1.5 million interest free loan to the AHT to enable the building of the centre to go ahead.

Dr. Peter Webbon, Chief Executive of the AHT said, "Cancer remains one of the biggest threats to the wellbeing of our dogs, but we hope that through the new Kennel Club Cancer Centre at the AHT, we will be able to take major strides towards improving the health and welfare of not just dogs but other animals too."
KATE WATKINS